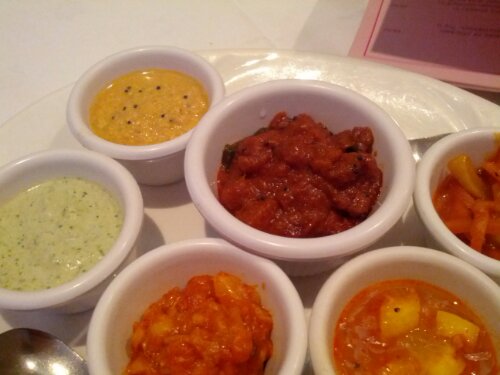 Generally we think of pickling as a way of preserving fresh foods, and creating flavourful accompaniments to potentially otherwise dull mainstays. Usually this would be something cheap and plentiful, so its interesting to see a pickle making use of an expensive protein as is main ingredient. I’d assume this is down to Rasa’s previous incarnation as Rasa Sumadra, a specialist outlet of this high-class Indian franchise with fish taking centre stage. We had to order the pickle specially, since it doesn’t feature on the standard Rasa menu.

“We had to order the pickle specially”

So how is it? At first, you’d be forgiven for not realising that it’s actually fish. The flavour is there, but well masked by the strong vinegary, spicy, sugary additions. In fact, it’s in the texture, with the soft, chewy bite that makes you realise the centimetre cubes are chunks of preserved ex-swimmers. And this is where the fish shines, since it is a great addition to the texture of pickle, creating something substantial, meaty and dense without creating something unrecognisable. It’s definitely not fish curry (and it would be a horribly sour and sweet one if it were). Distinctly pickle, but also rightly something with a bit more right to strut its stuff on the chutney plate.

No, I wouldn’t make a trip out just for this. And given you’d have to phone ahead to get it, it would take planning to come by. Maybe I’ll try to make my own. It has certainly made me rethink the humble pickle.